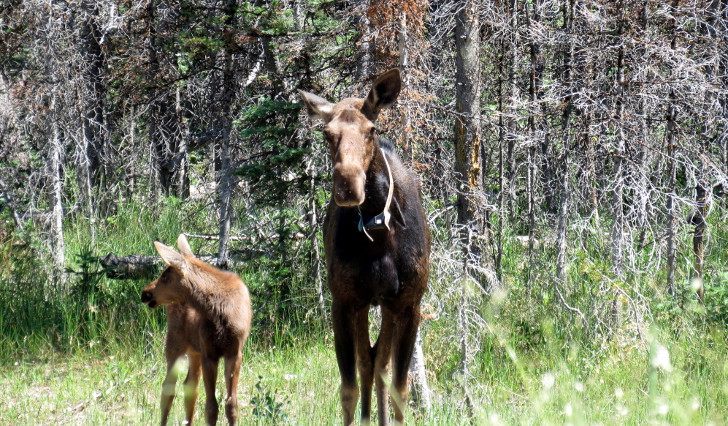 The Snowy Range moose herd encompasses individuals within the Sierra Madre, Snowy, and Laramie ranges of southeast Wyoming. Though most moose herds in Wyoming have recently experienced population declines, it is generally thought that the Snowy Range moose herd has remained strong and healthy. The population underwent rapid growth following its original colonization of the area in the 1980s and the area has become prized by hunters for its abundance of prime bulls. Nevertheless, the Snowy Range herd is more difficult to count than many other larger herds in western Wyoming because of the expansive conifer forests. As a consequence, the actual performance of this herd remains unclear.
The impetus behind the project is to determine the trend of the population, and how habitat, harvest, and environmental factors are influencing it. We are approaching this question in a novel way through consecutive measures of habitat selection, nutritional condition (i.e., percent body fat), reproductive success, and survival from the same individuals. By monitoring nutritional condition relative to an animal’s space use and reproductive success, we can develop an estimate of where the population stands relative to what the habitat can support (i.e., nutritional carrying capacity). This will in turn provide biologists with valuable information to aid in management decisions for this important moose herd that is beloved by non-consumptive recreationists and hunters alike.
A prior study of moose in the Snowy Range, conducted by Philip Baigas, revealed that both coniferous and riparian habitat types are important to this herd. Much of the coniferous forest in the Snowy Range consists of lodgepole pine, which has been widely affected by the mountain pine beetle (also known as the bark beetle) between the previous moose study and the present day. There are many ways the glut of dead trees may influence how a moose moves through and forages in a forest. New gaps in the canopy from lost needles may positively affect moose by promoting growth of valuable forage plants. These new gaps in canopy, however, may reduce shade for moose—a northern-adapted species that is sensitive to warm temperatures.
We are combining the current study and the GPS collar data from the previous moose study to reveal what effect the bark beetle eruption has on moose behavior. Little research has been done on how the bark beetle has influenced large mammal ecology; we are excited to examine this by comparing movement behavior of moose now with moose a decade ago, as well as look at how habitat selection strategies of individuals can influence body condition and reproductive capacity. Moose collars (and their stored data) were reclaimed in March of 2017 for analysis. New collars with a satellite uplink were put on some of the moose when their old collar was removed— these new “live” collars will help us answer questions about what causes adult moose to die in the Snowies. Until recently the exact cause of death for many project moose was unknown because we didn’t know about most mortalities until well after they occurred. If you find a collar in the field or harvest a collared moose, please contact the Coop Unit so we can download the stored data. We also are keen to hear reports of collared moose sightings. Each moose collar has a colored tag on the right-hand side. By noting the color and number, we can identify the individual. If you are willing, please send tag information, along with the date, general location, and a photo to [email protected] and we will be happy to provide some information about that moose’s participation in the study.

Moose are captured in December and March of each year to evaluate reproductive status and body condition over the course of the year. Helicopter darting is the safest and most effective way to capture moose in forested mountains like the Snowy Range.

In the cockpit of the Robinson R44 capture helicopter.

Drs. Kevin Monteith and Matt Kauffman fit a GPS radio collar to a female moose. By wearing the collar for two years, this moose will provide invaluable data on movement behavior and habitat use. The collar will be removed at the end of the study.

Though its eyes are open, the moose is anaesthetized and docile until a reversal drug is given. After the collar is fitted, detailed information about body size, age, nutritional condition, pregnancy, and parasite load is collected.

Ear-cropping is a clinical presentation of carotid artery worm. This parasite lives in the carotid artery of moose, deer, and other ungulates. The worm can wind up in the wrong place and block circulation to areas like the ear tip.

Moose struggle with ticks in many areas of their distribution. Some moose can have over 100,000 ticks in extreme cases; at times the blood loss and coat damage from scratching is enough to spell death for struggling individuals.

The yellow box is a portable ultrasound unit. We use this to precisely measure each moose's body fat reserves. Body fat is an excellent metric of nutrition for many mammals. We are also able to use the ultrasound to determine pregnancy status.

A moose about to be released near Kennaday Peak

Calf surveys allow us to estimate summer survivorship of the calves. Twinning rates are also an important metric of population health; we would expect to see many sets of twins in areas where the population is growing rapidly

The survey this summer only resulted in one set of twins. The good news is that most cows that were pregnant in March had a calf with them in July. Surviving the "neonatal" period immediately after birth is often difficult in many ungulate populations.

These examples were from the easy observations! More often than not the mother and calf were hidden in thick forest or willows, and we only got fleeting glimpses of the calf. Can you see the calf in this picture?

The collars allow us to locate the moose during the calf surveys with radio telemetry. Fellow graduate student Bryan Lamont is seen here pinpointing the willow one of the moose is hiding behind near Elk Mountain.

If the terrain is right and luck is on our side, we can observe the moose from a distance from a high ridge. Warden Biff Burton and fellow graduate student Travis Zaffarano spy on a moose near Pass Creek.

Habitat is critical to the health of all Wyoming's animal life. A component of this project involves characterizing that habitat with regards to its ability to support moose. (Little Laramie River)

Our habitat sampling is accomplished through advanced analyis of satellite data and on-the-ground fieldwork. Sometimes when the storm is large enough the fieldworkers wish they were satellites, but only briefly. (Fox Park Area)

One of the on-the-ground techniques is measuring browse intensity in a variety of willow communities. Willow are an extremely important food source for moose, and are also enjoyed by cattle, elk, and other animals.

Many different willow species occupy the Snowy Range, and plane leaf willow is one of the tastiest. We measure annual growth and compare it to dead leaders that have been eaten. You can see where an animal (likely a moose) snipped the branch off.

Fellow moose-oriented graduate student Brett Jesmer conducts a willow survey in the Snowy Range. His crew measured willows here two years ago. We are excited to compare our findings in this study to his, as well as the previous study a decade prior.

Graduate student Alex May investigates a moose bed in a willow community. Part of what we're interested in is shade quality between willows and pine forests. Notice how both the cow and calf beds are in shade patches.

We approximate this with selfies. At each area we survey, we measure "visual obstruction", seen here, as well as canopy cover. Both large shrubs and tree canopy can influence how shady, and therefore cool, an area is.

Pine forests may be shadier on average than willow communities, though isolated areas of complete shading are harder to find. The pine bark beetle has killed many pine trees throughout the Snowy Range, and we are curious how this may affect moose.

Beetles tend to avoid the smaller trees and even areas that have been heavily affected have not experienced 100% mortality; this is known as a "dog hair" pine stand. Though it's shady, it's probably a pain to move through and has no moose forage.

Wildlife-habitat relationships are complex and sometimes hard to interpret with human eyes. By combining habitat sampling with GPS movement data, body condition, and reproduction, we can paint a vivid picture of the state of Snowy Range moose. 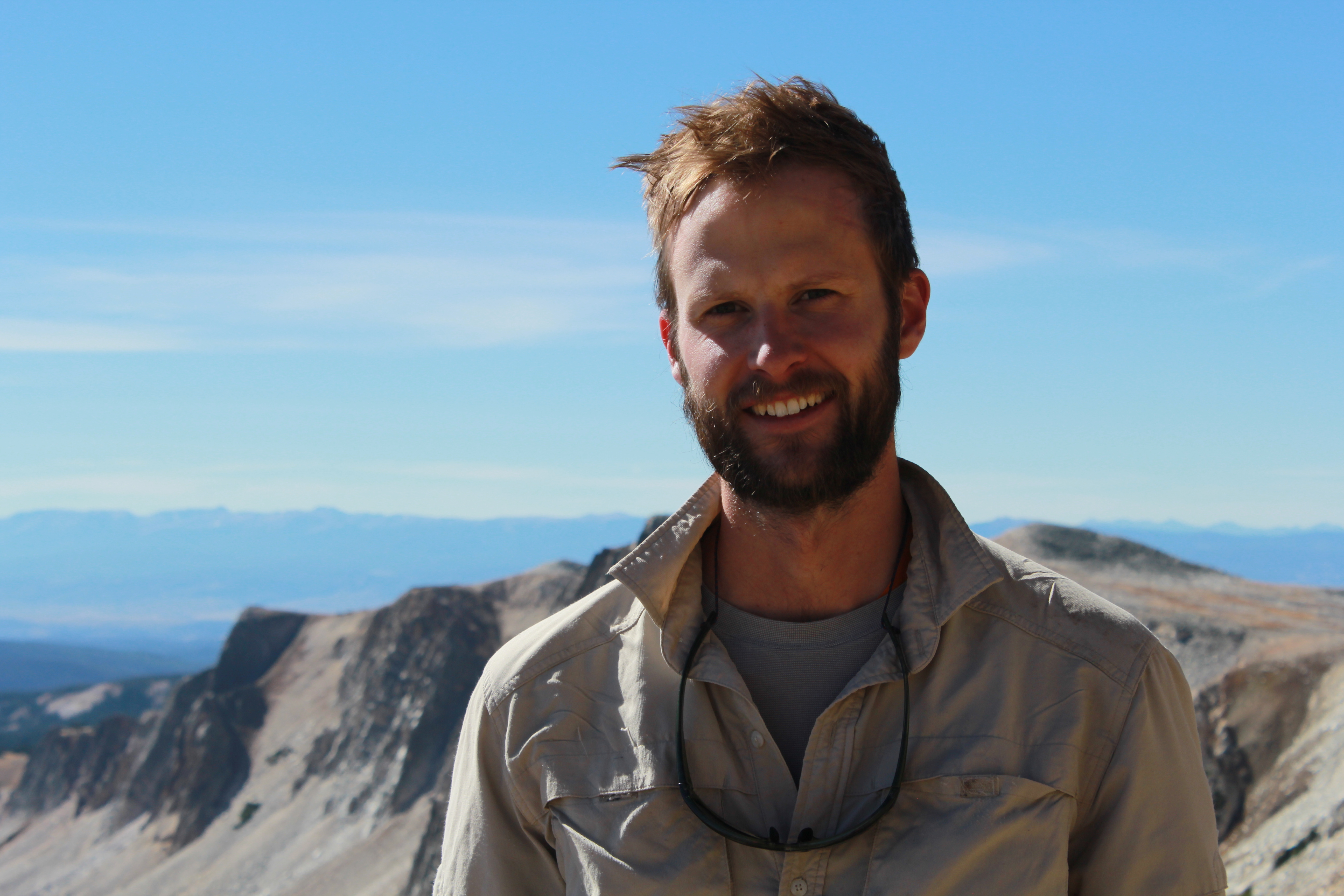 Alex was the project lead for the Snowy Range Moose Project. He came to Laramie to pursue his Master’s degree in the Coop Unit after four seasons as the wildlife crew lead at Grand Teton National Park.

June-August 2016- Second round of habitat sampling

May 2017 and beyond- Analysis and reporting of project findings. Continued monitoring of study animals to determine cause of death for those that do not survive the next three years.