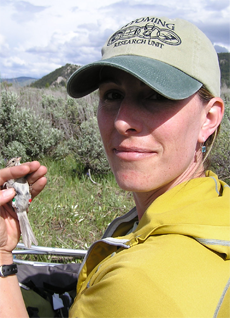 Anna joined the Unit in May, 2011 as the Assistant Unit Leader for Wildlife after working in a similar capacity with the Unit and Department of Zoology and Physiology as a Research Scientist beginning spring, 2008.  She has an undergraduate degree in Biological Sciences from Smith College, an M.S. in Wildlife Science with a Conservation Biology emphasis from the University of Missouri-Columbia, and a Ph.D. in Wildlife Biology from the University of Montana-Missoula.

Anna’s work has largely focused on understanding wildlife-habitat relationships, and especially the contexts under which habitat choices are adaptive. A primary focal system for this work has been nest site selection in passerine birds and its consequences for the probability of nest predation. Other interests have included understanding the impacts of habitat fragmentation, and the evolution of life history traits with a focus on parental care behaviors in birds.

Current work in her lab spans multiple taxa (avian, mammalian, herpetofaunal) and has an emphasis on understanding the impacts of various types of anthropogenic change. Anna and her graduate students have on-going projects focused on birds and energy development (natural gas, coal-bed methane, wind), climate change impacts and the American pika, the impacts of the current mountain pine beetle pandemic on lodgepole birds and small mammals, and the utility of using the sage-grouse as an umbrella species for the conservation and management of non-game sagebrush species of concern. A primary focus of work in the lab is to provide timely information to agency cooperators to facilitate the management of Wyoming’s non-game wildlife species of greatest conservation need.

Chalfoun, A. D., and T. E. Martin. 2010. Parental investment decisions in response to ambient nest predation risk versus actual predation on the prior nest. Condor 112:701-710.

Chalfoun, A. D., and T. E. Martin. 2007.  Assessments of habitat preferences and quality depend on spatial scale and metrics of fitness. Journal of Applied Ecology 44: 983-992.