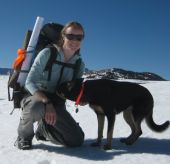 Abby currently works as a Wolf Management Specialist for Montana Fish, Wildlife, and Parks.  Abby received her undergraduate degree from Colorado College in 2002, and since that time has worked in Colorado, Montana, and Wyoming on various wildlife related projects. Abby worked from 2004-2007 as a biological science technician for the Yellowstone Wolf Project on field studies of wolf behavior, kill rates, and prey selection. From 2007-2011, Abby coordinated the Absaroka Wolf-Livestock Project, a colaborative study between the Wyoming Game and Fish Department, the US Fish and Wildlife Service and the University of Wyoming.  This study examined patterns of wolf predation and habitat use in an area characterized by high levels of wolf-livestock conflict near Cody, Wyoming. She has also been involved with research on the Absaroka Elk Ecology Project in a shared study area of the two projects. In August 2011 Abby completed her master’s research in the Wyoming Cooperative Fish and Wildlife Research Unit and Department of Zoology and Physiology. When she’s not working, Abby enjoys snooping around the mountains on skis, horses or on foot, and trying to catch dinner, whether it has fins or fur.

“The influence of elk migratory patterns on wolf resource use in Northwest Wyoming.” The Wyoming Chapter of the Wildlife Society, Lander, WY. November 2010.

“Wolf habitat selection in the Absaroka Mountains of Wyoming.”  The Wyoming Chapter of the Wildlife Society, Cody, WY. November 2009.

“Wolf habitat selection and predation patterns in the Absaroka Mountains of Wyoming: Identifying the drivers of wolf-livestock conflicts.” The Wyoming Chapter of the Wildlife Society Annual Meeting, Sheridan, WY.  November 2008.