Herd composition surveys are conducted annually for big game species in Wyoming and elsewhere. These surveys provide biologists with information regarding the age and sex ratios of each herd as well as recruitment rates. This information is critical for setting and reaching population objectives and adjusting harvest limits. Traditionally, these surveys are conducted via helicopter and fixed wing aircraft; but these techniques are very costly, and they are potentially dangerous for the personnel involved. Recent success in using remotely triggered cameras to classify migratory mule deer passing through 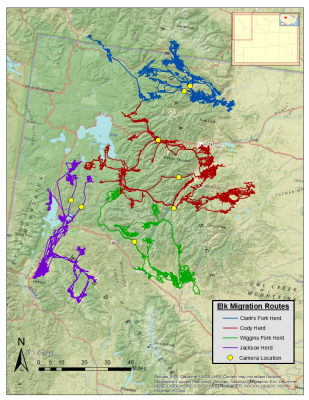 highway underpasses has sparked an interest further investigations of this method. We are evaluating the efficacy of using trail cameras to collect herd composition data for several migratory elk herds that inhabit the Greater Yellowstone Ecosystem. Where highway underpasses offer convenient ‘funnels’ along migratory routes for mule deer, determining where naturally occurring bottlenecks occur on the landscape is less intuitive. We have used GPS locations from collared elk in four migratory herds to determine where migration routes overlap, suggesting areas where elk herds must converge through restrictive travel corridors along their migratory routes.

Photographic monitoring stations located along migration routes have provided over 300,000 images of migrating elk and other wildlife species. In many locations, several thousand elk have been observed as they migrate through these bottlenecks during the spring and fall migration periods. Long-term migration trends are being observed where trail cameras have been in place for several years. 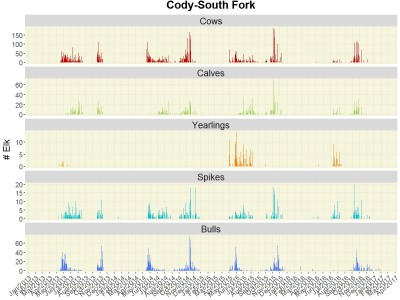 Monitoring the timing of migration for each of these herds has provided some valuable insight into differences in migration activity between adult bull and adult cows, as well as differences between cows with calves and cows without 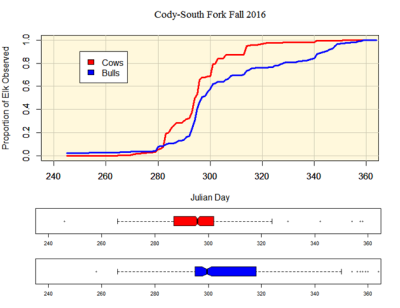 Observing the timing of elk migration during the fall will help regional biologists gain a more targeted understanding of when elk are arriving on specific hunt areas and available for harvest. Having a better overlap of hunt season and availability of elk for harvest could lead to better hunter success to the benefit of reaching population objective for specific herds. 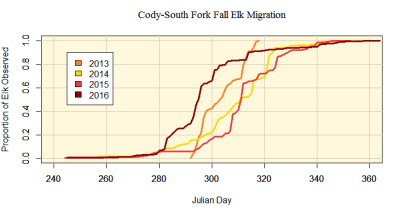 Gaining a better understanding of herd-specific migration timing and herd composition will benefit regional biologists within northwest Wyoming where many migratory elk herds mix with resident herds on winter habitats. Developing a network of trail cameras, used to collect demographic data remotely, will allow biologists to monitor these herds in manner that is cost effective, safe, and efficient. Effective photographic monitoring stations will provide an effective tool for elk herd demographic and migration timing monitoring.

A large herd of elk pass by this camera site on their way to low elevation winter habitat near Cody, WY. Herd composition data from camera traps could offer a cost effective, and less risky alternative.

Many adult bulls make their way to winter grounds later in the fall than the majority of the herd. Many of these migratory herds make their way under the cover of darkness.

Calf counts between fall and spring can lend information to calf survival and recruitment.

Many adult bulls migrate in what are known as "bachelor" herds which tend to be separate from the cow/calf groups until breeding season.

Many incidental sightings of non-target species are captured, including this adult and kit mountain lion.

Grizzly bears are often captured on the trail cameras as they move along heavily used game trails.

Wolves are often captured on the trail cameras using the game trails.

The fall migration can be a rough time to travel over high elevation ridges.

The various migration routes taken by migratory elk in the Greater Yellowstone Ecosystem. By identifying where naturally occurring 'bottlenecks' are located along migration paths, we hope to develop a network of remote camera monitoring stations. 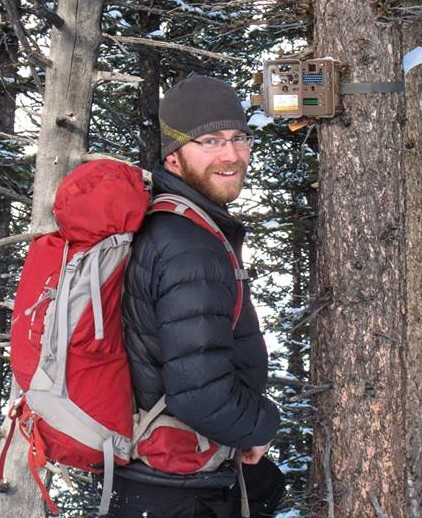 Travis is earning his M.S. degree working with the Wyoming Cooperative Fish and Wildlife Research Unit at the University of Wyoming. His research investigates the use of trail cameras in conducting population surveys on migratory elk herds in the Greater Yellowstone Ecosystem. These new methodologies could provide a safer, more cost effective method of collecting this critical data.

This project is scheduled for completion Spring 2018.