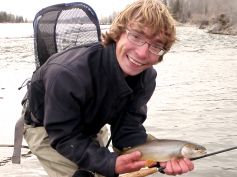 Zack Underwood completed his MS in 2015 and is currently working with Colorado Parks and Wildlife.

Starting in August 2012, Zack began working with the Wyoming Cooperative Fish and Wildlife Research Unit, US Fish and Wildlife, and Wyoming Game and Fish on a project evaluating burbot out-migration from several lakes and reservoirs in the Wind River drainage in central Wyoming.

Zack has often been described as a fly fishing fanatic and can usually be found pursuing all manner of icthyofauna, from common shinners to lake trout. Zack also enjoys cycling, cross country skiing, and playing bass and guitar (albeit poorly).