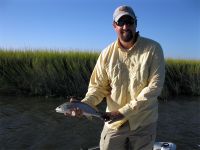 Scott Carleton has been a postdoctoral research scientist in the Cooperative Fish and Wildlife Research Unit at the University of Wyoming since 2009.  His research interests are in applied fish and wildlife ecology.  His current work utilizes stable isotope microchemistry of water and fish otoliths to reconstruct movement patterns, differentiate populations, and determine the natal origins for native sport fish in Wyoming.  For his PhD, he worked on white-winged doves in the southwestern United States linking breeding and wintering populations, describing habitat and resource use, and investigating how sympatric species of doves partitioned desert resources.  Scott did his masters work at the University of Arkansas where he studied the breeding ecology of the endangered resplendent quetzal, a bird with cultural, historical and economic importance to the people of Central America.  Scott has worked as an avian biologist in Arkansas and Oklahoma for private and federal agencies investigating the distribution and occurrence of migratory breeding bird species in managed landscapes.  Scott is also an avid fly fisherman, is a fly designer for Montana Fly Company, and enjoys spending his free time floating and fishing western rivers.

Martinez del Rio, C and SA Carleton.  2011.  How fast and how faithful – the dynamics of isotopic incorporation into animal tissues.  In review Journal of Mammalogy View PDF

Carleton, SA, L Lane, A Sprecher, and C Martinez del Rio.  2008. Should we use one, or multi-compartment models to describe 13C incorporation into animal tissues?  Rapid Communications in Mass Spectrometry 22:3008-3014 View PDF

Carleton, SA and C Stricker.  2011. Tracking resource use partitioning and shifts in white-winged and mourning doves between desert and agricultural habitats. In preparation Animal Ecology