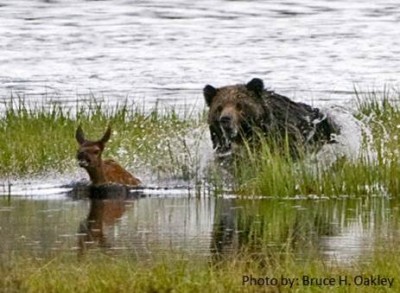 A decline in native Yellowstone cutthroat trout due in part to the introduction of nonnative lake trout has driven a shift in the diets of grizzly bears that helps explain losses in some migratory elk herds in the greater Yellowstone area, according to new research published today.

The article in the Proceedings of the Royal Society B, led by recent University of Wyoming Ph.D. graduate Arthur Middleton along with numerous collaborators, provides further support for efforts by Yellowstone National Park to suppress the lake trout population in Yellowstone Lake, those researchers say.

“This synthesis suggests that even in a core wilderness area like Yellowstone, a fisherman’s blunder in the aquatic system many years ago can have far-reaching effects by forcing a nomnivorous predator to seek new foods in the terrestrial landscape,” Middleton says. “These surprisingly broad ecological consequences underscore the importance of identifying new methods to suppress lake trout and the value of preventing such invasions elsewhere.”

Over nearly two decades, monitoring has shown a dramatic drop in the numbers of native cutthroat trout that inhabit Yellowstone Lake and spawn in its tributaries, largely as a result of the illegal introduction of lake trout — which prey on cutthroats and spawn at depths inaccessible to bears. Other factors in the decline of cutthroats are thought to be drought and whirling disease. The lake trout invasion is believed to have influenced the foraging of many birds and mammals, but its cascading ecological effects have only come to light more recently.

Historically, spawning cutthroat trout were documented as an important seasonal food source for as many as 70 of Yellowstone’s grizzly bears. Recent studies by researchers at Washington State University, however, now indicate that female grizzlies have turned to elk calves — which are born at the same time of year when cutthroat spawn — to replace the loss of fish in their diet.

Meanwhile, state wildlife agencies in Wyoming, Montana, and Idaho have observed significant declines in some elk herds that spend summers in high-elevation areas of Yellowstone and migrate to valleys 25-85 miles outside the park for the winter. Specifically, cow-calf ratios in these migratory herds have dropped significantly, and the new research shows that summer predation — likely by grizzlies — is thinning the crop of elk calves even before the herds begin their fall migrations out of the park.

While drought and the sheer increase in numbers of wolves and grizzlies have also contributed to the decline of elk herds in the greater Yellowstone area, the new research shows that prey switching by grizzlies due to the loss of cutthroat trout is also “capable of creating meaningful changes in the population dynamics of migratory elk.” Grizzlies specialize in killing elk calves in the first few weeks of life, whereas wolves tend to hunt them later in the fall and winter — which means that intense grizzly predation can pre-empt the effect of wolves on calf numbers.

“Our work suggests that important effects of human disturbance and grizzly bear predation on migratory elk are being overlooked,” the report says. It adds that the shift in grizzly diets from cutthroat trout to elk calves “is uniquely important to research and management because it represents a novel, human influence operating cryptically within core protected areas” of Yellowstone.

While at UW, Middleton worked under Matt Kauffman, head of the Wyoming Cooperative Fish and Wildlife Research Unit and assistant professor in the Department of Zoology and Physiology. Middleton is now a post-doctoral fellow at the Yale School of Forestry and Environmental Studies.

Kauffman, a U.S. Geological Survey scientist, is one of the co-authors of the report published today — along with a collaborative team of researchers from Washington State University, Iowa State University, Yellowstone National Park, the Wyoming Game and Fish Department, and Montana Fish, Wildlife & Parks.

To view the full report in the Proceedings of the Royal Society B, go to:http://rspb.royalsocietypublishing.org/content/280/1762/20130870.abstract.

For more information, lead researcher Arthur Middleton may be reached at 307-460-0880 or [email protected].

Photo:
A grizzly bear chases an elk calf in Yellowstone National Park near Mammoth, Wyo., in 2009. New research shows that prey switching by grizzlies due to the loss of cutthroat trout is “capable of creating meaningful changes in the population dynamics of migratory elk” in the greater Yellowstone area. (Bruce H. Oakley Photo)